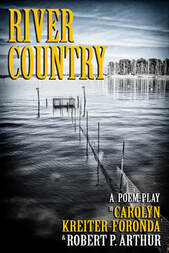 River Country: A Poem-Play (www.havescripts.com) ​by Carolyn Kreiter-Foronda and Robert P. Arthur captures the intriguing relationship between a South American Indian and his United States soul mate.  After moving to the enthralling environment of River Country, the couple—Patricio and Amber—find solace in nature through the tantalizing voices of birds, the sloshing of water, the ethereal splash of an osprey—each sound vivified by a guitar’s strumming, a flute’s voice, the pounding of drums, or songs that contribute to a scene’s atmosphere.  At times, Amber reflects on her own near-death experience or her mother’s epileptic seizures.  Throughout, her husband stands by her side, the pace of his actions determined by an inner spirit where love never dies.

Poetry and drama do not simply coexist, they cohabit. A poem is always in search of a stage. It might be a bridge, or the bank of a river, or even a shady back porch in the house of memory.  River Country--rich and persuasive from its inception--was destined to come alive on the stage, to speak in a multitude of voices, to weave its storyline through a variety of characters, and to arrive paradoxically at its plenitude by yielding its singular voice to a plurality of voices—with no loss of self. This, River Country achieves to great, compelling effect, attaining fullness  in Robert P. Arthur and Carolyn Kreiter-Foronda’s eponymous poem/play.
Sofia M. Starnes, Virginia Poet Laureate Emerita
Cover photograph by Michael Kunzinger 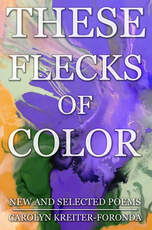 "Carolyn Kreiter-Foronda’s poems strike the ear along with the intelligence, evoking the natural world, visual art, and questions of self, transcendence, and responsibility, in the lyric mode. Her poems embrace the great subjects of the lyric: the intense, intuitive, and revelatory relationships that one thinking person can effect through observation, memory, and experience. . . . This poet is also doubly gifted, doubly trained, and brings a painter’s eye to the task of words. . . . Kreiter-Foronda’s poems remind us that seeing has its own way of meaning, and knowledge can arise from immersed observation as clearly as from overt acts of thinking. Her poems develop an idea of individual responsibility in relation to what is natural. In moments of intense emotion time is stilled, yet expands; these poems open like flowers with illuminated moments of double vision, inviting and challenging us to look again, revise our cursory sight and think more deeply."
Cathryn Hankla, “Redoubled Visions: Carolyn Kreiter-Foronda’s Lyrics”
Four Virginia Poets Laureate (2004-2012), Edited by Sofia M. Starnes 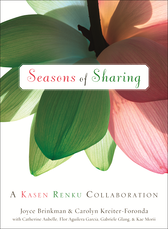 ​Seasons of Sharing offers poetry born of collaboration, poetry that reaches the universal from distant points of planet earth. Six global partners, communicating by e-mail, create poetry that is immediate, intimate, and modern, carried in an ancient poetic form through the world’s newest means of communication: the internet. While exploring the richness of seasons, the book metaphorically visits incidents on the world stage, such as climate change, the Arab Spring, and urban violence. Dr. Joseph Heithaus, professor at DePauw University and author of Poison Sonnets, calls the book “a collaboration of first merit.” Seasons of Sharing includes French, Spanish, German, and Japanese translations.
​

From the first to the last page of The Embrace: Diego Rivera and Frida Kahlo, Carolyn Kreiter-Foronda captures and evokes the spiritual richness and artistic quaking of Frida Kahlo and Diego Rivera and their complicated, love-torn lives. With sumptuous imagery, yet acute precision and detail, the book delves into the artistic, marital and physical struggles of the artists, detailing how Kahlo, who even as she was undergoing painful surgeries and engaging her work, anguished about her husband Diego Rivera’s famous infidelities . . . .  With its kinetic energy and bold envisioning, The Embrace is a well-researched, supremely crafted and perfectly executed narrative “embrace.”
—Shonda Buchanan, author of Who’s Afraid of Black Indians?

​With its well-measured, sonorous words, River Country captures the setting of Tidewater Virginia, all the way to the Bay. This book contains a life list of birds, seen in context, from cardinals fretting at a backyard feeder . . . to the once threatened osprey that "dives to kill." Unflinching in her observations and meditations while deeply empathetic with the natural world, Carolyn Kreiter- Foronda writes from an awareness of our human, mostly sorry, impact on land, waters, and creatures, even as she sings every shred of life she sees.
--Cathryn Hankla, winner of the James Boatwright III Poetry Prize

This chapbook is part of a GOLD Invitational Series celebrating the award-winning poems of Carolyn Kreiter-Foronda. As both a poet and painter, the author presents twelve poems that focus on the infinite possibilities open to us when we take time to look closely at an object or experience. In the introduction, the author provides information about the genesis of each poem.

This collection offers a new perspective on spiritual growth. Set against a background of death, history and myth, the poems range from free verse to dramatic monologues and sonnets, with verse written so skillfully that the subtle rhyme schemes elude us.  In the first section, Kreiter-Foronda welcomes readers to the enchanting world that opened up to her after she confronted death while still in her teens.  She then explores lessons learned from a diverse cast of characters, contemporary and historical, some precariously close to death, others speaking from the grave.  The book's final poems take us to the ethereal Andes and the gem-laden hills of Brazil, which hold the key to the author's quest.
​
​Cover photograph by Carolyn Kreiter-Foronda
​

From Bolivia to Kenya to Perú; from Kilimanjaro to suburbia to Machu Picchu, nothing and no one escapes the powerful word-sculpturing of Carolyn Kreiter-Foronda in Gathering Light:  a child begging for a pen to use in school in Puca Pucara, Vincent Van Gogh making the miracle of turning a branch into a shepherd, Georgia O’Keeffe reminding us that to be able to see, like making a friend, takes time.  There is so much silence in these poems, and yet every line has a voice of its own which Carolyn turns into color, song, dance, or smile.  After turning the last page of this magic text, the reader feels like bringing his own aged word, naked eye, and wide-open ear and read aloud all over again this fascinating feast for the senses.
—Rei Berroa, George Mason University
Cover painting by Carolyn Kreiter-Foronda
​

Each poem in Contrary Visions is like a painting in an illuminated manuscript, marking not the passage of months, but the progress of the soul toward harmony.
—Ai, winner of the National Book Award

Kreiter-Kurylo's poems proclaim the beauty and abundance of this world -- of memory, history art and music, of outcasts and exemplars and the fragile, natural economies they inhabit -- and as they do so, quietly they celebrate themselves.  They are their own best source of  wonder.
—Peter Klappert, winner of the Yale Series of Younger Poets Award
​                                              Cover painting by Carolyn Kreiter-Foronda

That certain place . . . is the firm-rooted place of vision and confidence in a torrential human landscape of changing mores, shattered hopes, tenuous trusts and tentative commitments.  It is the place of life-giving clarity in something greater than ourselves, something awesome and enduring enough to keep us anchored and safe in the storm. It is the place, at once inviting and fearsome, where the numinous speaks and we listen--the place of vitality, conversion and missioning forth to live in a world too often profaned by those things that corrupt our humanity.
—Br. Rick Wilson, T.O.R. Franciscan 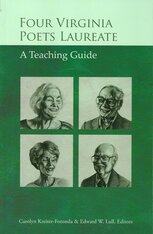 Four Virginia Poets Laureate contains a history of the poet laureate appointment in Virginia, as well as poems by George Garrett (2002-2004), Grace Simpson (2000-2002), Joseph Awad (1998-2000), and Margaret Ward Morland (1996-1998).  Also included are biographies of the four laureates and commentaries on their work by Roseann Runte, Jim Peterson, Cathryn Hankla, and Henry Hart.  Classroom exercises accompany each laureate’s poems.  The Poetry Society of Virginia offers this teaching guide as a tool to enrich poetry instruction in high schools, colleges, and universities.

Urban Voices offers poems by an array of innovative and traditional voices.  The poems reveal both common themes and unique characteristics found in the broad scope of America's urban landscape. Most of the writers included in the anthology are current or past state laureates.  Also represented are two esteemed U.S. Poets Laureate, Ted Kooser and Billy Collins, as well as poets recommended for their association with large urban centers.